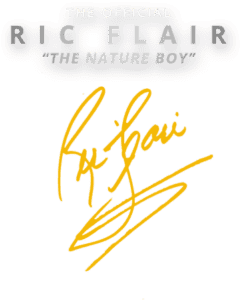 This is a one-of-a-kind opportunity to get a video shout out from the Nature Boy Ric Flair! This is a limited product and opportunity. All requests will be reviewed and produced within 30 days. Please submit your information in the form and submit your payment. Once all your information is received our staff will review your request and follow up with confirmation. All sales are final.

THE MOST DECORATED
WORLD CHAMPION IN HISTORY

THE MOST DECORATED
WORLD CHAMPION IN HISTORY

THE MAN Ric Flair is a celebrity and professional wrestler. Also known as the “Nature Boy®,” Flair is among the most famous and well-known wrestlers in the world, and has been one of wrestling’s biggest stars since the late 1970s. Flair was often popular with the crowd due to his in-ring antics, including rule breaking (earning him the distinction of being “the dirtiest player in the game”), his cocky interview style, strutting and his shouting of “WOOOOO!™” The “WOOOOO!” yell has since become a tribute to Flair, and is often shouted by the crowd whenever they see Ric or when another a wrestler performs one of Flair’s signature moves. A Facebook and Twitter favorite, YouTube sensation, and whose name returns almost 4 million Google hits in under .2 seconds, Ric Flair is an international icon.

Ric and his daughter, Charlotte come together to tell their story in SECOND NATURE for the first time.  /  July 2017

RIC FLAIR HAS ALWAYS KNOWN WHO HE IS
“a Limousine-ridin, Jet-flyin, Kiss-stealin, Wheelin-dealin, Son-of-a-Gun.”
Yet incredibly, he almost didn’t become the most celebrated champion in sports-entertainment history. In addition to surviving being struck by lightening twice, on October 4, 1975, he was among five passengers injured after an improperly fueled Cessna 310Q twin-engine plane suffered mechanical failure and crashed down in Wilmington, North Carolina. Doctors insisted that Flair, who had broken his back in three places, would never wrestle again. So he did the only thing he could do: Ignore the doctors, rehab, and become a ring legend with a “flair” for championship gold. “I wish I could say that the plane crash humbled me,” he says, “but I just started living the life of the ‘Nature Boy®’ and didn’t look back. I took my insurance settlement and bought my first new Cadillac.”

Flair, whose body has been insured by Lloyd’s of London, made his name on wrestling hour-long marathon matches. Taking part in two influential and historical factions, The Four Horsemen and Evolution; “Slick Ric” maintains that the party he started four decades ago is far from over. Flair has never strayed from being “The Man” who most young sports-entertainers – WWE Superstars included – idolize. Even those unfamiliar with his career, the “styling and profiling™” in custom-tailored sequined ring robes, or his “Nature Boy” strut, know one thing when they hear “WOOOOO!™” shouted at a live event, a craps table in a Las Vegas casino, or on the scoreboard at the RBC Center, home of the NHL’s Carolina Hurricanes: They’re in “Ric Flair Country.”

During his celebrated career “The Nature Boy” wrote an autobiography “To Be the Man”, a New York Times Best Seller, and released a 3 disc DVD set on his storied time in the wrestling business.

Flair is recognized by World Wrestling Entertainment (WWE) and Pro Wrestling Illustrated (PWI) as a 16-time World Champion (WCW), he also had two stints as a Heavyweight Champion, although his actual tally of World Championship reigns varies by source – some totaling as high as 21. Flair also won the 1992 Royal Rumble and the WWE Intercontinental Championship.

On March 30, 2008, one night after he became the only active wrestler to be inducted into the WWE Hall of Fame, Flair ended his 36-year career at WrestleMania XXIV. Ric Flair’s robe, trunks, and boots worn at Wrestlemania XXIV are permanently exhibited at the Smithsonian National Museum of American History in Washington DC.
Ric Flair is the most decorated World Champion in history.

There are no upcoming events at this time.

Contact us for booking the man, ric flair and for Other inquirIes