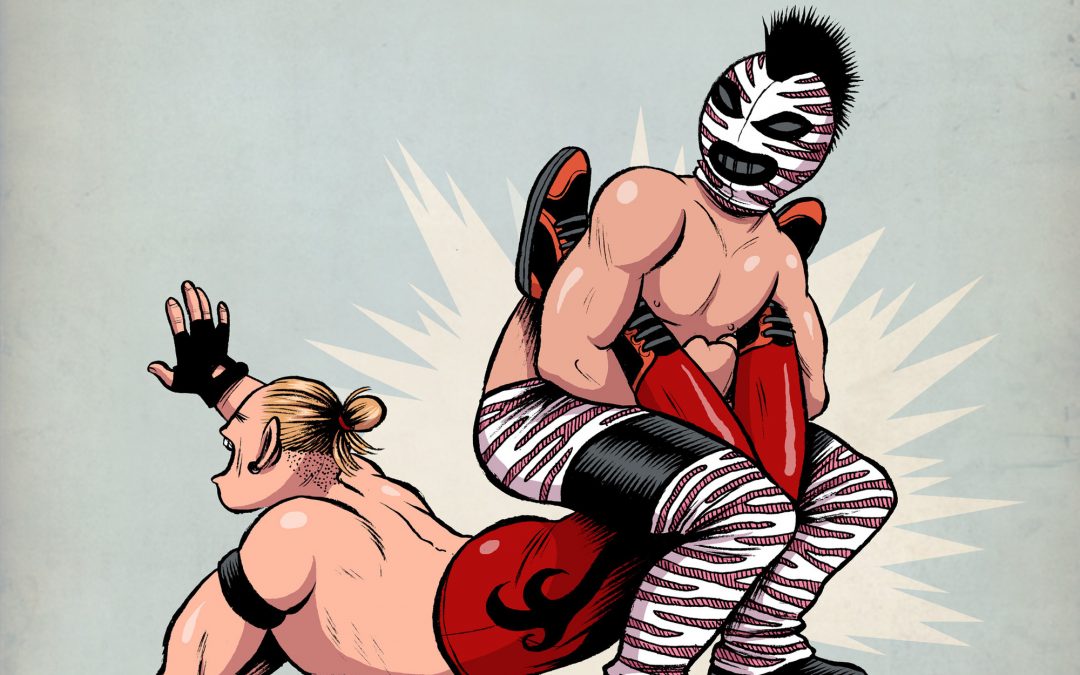 For decades, WWE Superstars of all shapes and sizes have been wowing crowds, performing feats of strength and flying around the ring.

From Andre the Giant to John Cena, each one has come prepared for combat their own unique WWE moves. True fans will argue until they’re blue in the face about who’s got the best moves.

And though there are many that could’ve made the list, let’s take a look at the 5 most noteworthy wrestling moves in WWE history.

You can’t have a list of best WWE moves that doesn’t include the finisher of the 16-time world champion Ric Flair. Woo!

Long before he was a WWE superstar, Ric made a name for himself as the jet-flying, limousine riding, crown jewel of wrestling. And in virtually every match he won, he used the figure four to make his opponents surrender.

To set his up his man for this devastating finishing hold, Ric would weaken his victim’s legs with sometimes questionable tactics. Never above a chop block or tricky maneuver, they didn’t call him “the dirtiest player in the game” for nothing.

Few moves are as emblematic of a wrestler as the figure four is to Flair. Even when other wrestlers attempt to use it in a match, the familiar “woos” begin to echo through the building.

Recently, a new superstar has taken the figure four and made it her own. Ric’s daughter Charlotte Flair has steamrolled through the women’s division on both Raw and Smackdown using the figure eight, a modified version of her dad’s leg lock.

Charlotte shows off her incredible athleticism and innovation by adding a bridge to the move, inflicting even more pain on her opponent’s than her father could have imagined in his day.

Used by a virtual who’s who of wrestlers, the superkick is one of the most enduring WWE moves. It’s most commonly identified with Shawn Michaels, one of the greatest and most controversial characters in the WWE universe.

Perhaps the most famous superkick ever occurred on an episode of “The Barbershop,” a talk show segment hosted by the colorful Brutus “The Barber” Beefcake.

Shawn, who had been having issues with his tag team partner Marty Jannetty at the time, superkicked him out of nowhere. Then he hurled him right through the window.

The crowd went completely silent. They couldn’t believe their fun-loving, rocker hero could stab his best friend in the back.

Throughout his illustrious career, Shawn has ended opponents and friendships with a well-timed superkick. Fans know when Shawn warms up the band by stomping his foot in the corner of the ring, some unlucky guy is about to get a taste of Sweet Chin Music.

When you hear the word “sharpshooter” there’s only one legendary wrestling family that comes to mind – the Harts. From WWE Hall of Famer Bret “The Hitman” Hart to his groundbreaking niece Natalya Neidhart, the sharpshooter is arguably the most iconic submission move ever.

Bret has used the sharpshooter to finish opponents of all sizes, including the late great 600 lb. Yokozuna. His ability to lock in this deadly hold helped level the playing field for Bret, the consummate underdog.

Dubbed the “Excellence of Execution,” Bret would systematically weaken his opponent’s knees and back throughout the match. His attacks were very precise, all leading up to making his enemy tap out via the sharpshooter.

Ironically, Bret was the victim of the most famous sharpshooter in WWE history. At the 1997 Survivor Series pay per view in Montreal, Bret squared off against his bitterest rival, Shawn Michaels.

He lost the match, and his WWE championship when Vince McMahon ordered the ref to ring the bell while Shawn had Bret locked in his own move. Bret never tapped out, and the “Montreal Screwjob” as it has come to be known lives on in wrestling infamy.

The Stone Cold Stunner is one of the coolest and most noteworthy WWE moves of all time. And that’s the bottom line, because we said so!

Pro wrestling’s never had a better anti-establish rebel than Austin. He represented the ID of the every man. We all wished we could treat our bosses the way Stone Cold treated Vince McMahon every week on Monday Night Raw.

But it wasn’t just Vince who feared “The Rattlesnake” or his favorite weapon of choice. Austin’s friends and enemies alike knew that they too could fall victim to the stunner at a moment’s notice.

Austin built a reputation for unleashing the stunner out of nowhere and without prejudice. If you were between him and his beer, be prepared to feel the wrath of the stunner.

To this day whenever fans in a WWE arena hear the glass breaking, they know Austin is on his way and he isn’t leaving until at least one person gets it.

The fearsome finisher of the Undertaker (and his demon spawn brother Kane), the Tombstone had made opponents rest on peace for nearly 30 years.

How fitting that a wrestler who fancies himself after the grim reaper would end his opponents by planting them headfirst into the ground? And just for insult to injury, after he hits the Tombstone the Undertaker pins his victims with their arms crossed over their chest like a corpse.

The Brothers of Destruction — as the deadly duo are collectively known — has terrorized the ranks of WWE superstars with their seemingly other-worldly powers. They’ve mesmerized the fans and put a chill in the air every time they enter an arena.

There are some moves that tons of wrestlers use. For example, Hulk Hogan’s leg drop is devastating, but many other wrestlers have employed the move in their arsenal without conjuring images of Hulkamania.

No one uses the Tombstone unless they’re explicitly referencing (provoking, more likely) the Undertaker.

What are Your Favorite WWE Moves?

Now you know the top 5 WWE moves that stand out for us, we want to know your favorites. Don’t just tell us; show us!

We love seeing our fans in action. So make a video of your best impression of your favorite wrestler and his or her finishing move. We may just feature it on our site.

Would you like to bring the 16-time world champ to your event? Contact us about booking requests or other inquiries.